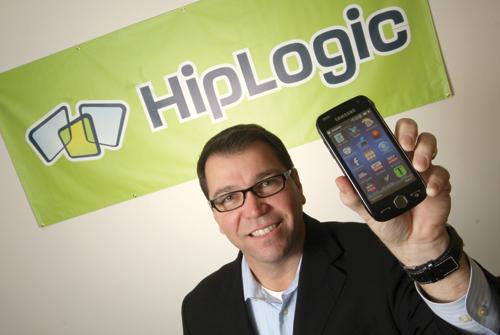 Hai Media Group is now supporting HipLogic with PR services in Europe, introducing media to the popular HipLogic Live application, a free download for Symbian, Windows Mobile and Android handsets, that CEO Mark Anderson describes as being an “extreme makeover” for your phone that will deliver an iPhone-like content experience.

HipLogic Live pulls content from real-time sources like Facebook, Twitter, Sky, Disney, Sports, Weather, newsfeeds and more, through a smartphone-like interface. It works by delivering push content notifications to the phonetop without using SMS. This means that they bring the world of applications, widgets, live search and real-time notifications to mass market handsets, without the need to invest in a new smartphone.

You just need one, simple, free download. The technology relies on a JavaScript virtual machine running on the device that is connected to the cloud that aggregates information and feeds from network operators and the Web to create mash-ups for use on Symbian, Windows Mobile and Android mobile devices. The aim is to provide always-on, fast access and logical presentation of content and applications that can be cumbersome to access through current mobile phone browsers – especially on multimedia-phones.

Prior to the debut of Skyfire’s version 1.0, on May 27, 2009, The New York Times named it to be “App of the Week” in the blog Gadgetwise. In the UK, bloggers and mobile experts raved about the service, saying:
“You see, Skyfire isn’t a ‘proper’ browser, more of a content viewer, with all the serious processing handled by the company’s proxy servers, the pages then being ‘rendered’ onto your phone. Just like the Opera browser in fact, but with more whistles, bells and streaming video.” – T3’s David Walker

“The release brings with it a host of improvements, such as improved navigation, zooming and interaction and a faster launch, lower power consumption, and new search functionality. Also, while the new version of the browser starts up, you can begin typing URLs or search queries into the box at the top, saving time. The company is operating a closed alpha for the BlackBerry platform, so that’ll likely be next for release.” –Pocket-lint.com’s Duncan Geere

“Their browser is fast and responsive, and Skyfire’s goal is to give a faithful representation of web pages that is equivalent to the desktop browsing experience. One important focus for Skyfire is in the area of video rendering… Skyfire’s approach is to introduce their own video-crunching servers between, say, YouTube and your Nokia N95. These servers take full Flash (Flash 10) and then video transcode the signal in real-time, giving a lower frame rate (8 frames per second), and a smaller screen rendering for mobile. The result is that the Skyfire browser can render an original YouTube page or Vimeo page, or even blogs with embedded video, so that you have access to the entire video catalogue, live on line.” –Martyn Davies, The Really Mobile Project

Watch The Phones Show for an interview with Skyfire’s VP of Business Development Raj Singh, offer extra insight to the browser’s features and hints of what’s to come.